Model for Alexander Enclosing Homer’s Poems in a Golden Chest 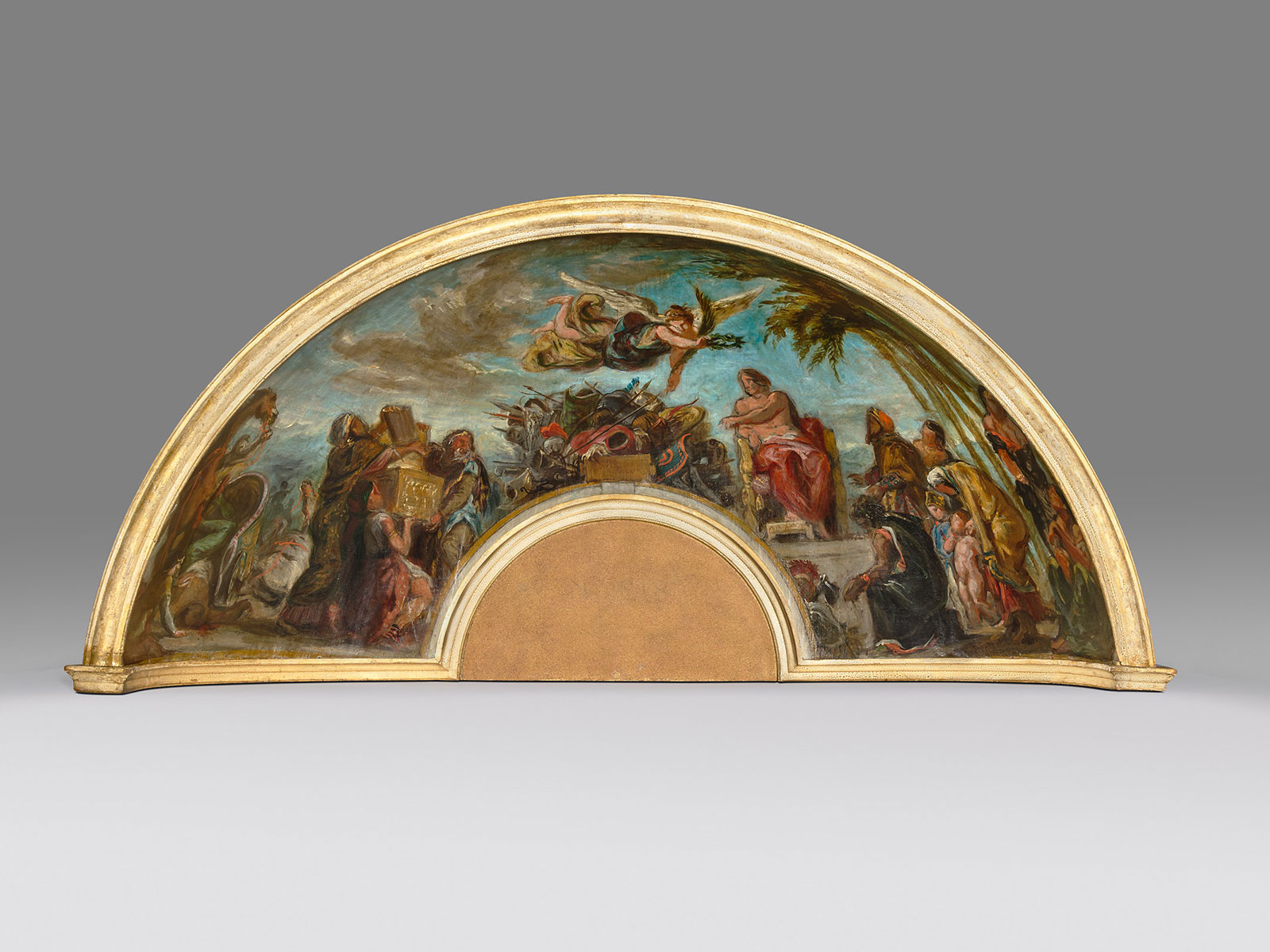 In September 1840, Eugène Delacroix was commissioned to paint part of the décor of the Chamber of Peers in the Luxembourg Palace (present-day Senate). Along with the central dome and its four pendentives, he was tasked with the lateral semi-dome, for which he completed this preparatory model acquired in 2017 by the Musée Delacroix. The painter had kept it in his various studios; it was found in his last studio on Rue de Furstemberg upon his death

The library of the Chamber of Peers in the Luxembourg Palace occupies a 52-meter-long gallery. One of the gallery’s two walls is windowless and covered with shelving; the other features a series of large bay windows overlooking the garden. The semi-dome is located above the central bay window. It is thus lit both from behind and below. This positioning created technical difficulties for the painter, who moreover had to find a way to paint on a concave surface without the figures appearing slanted or distorted. This is why Delacroix used a preparatory model allowing him to see how his composition would fit into the space for which it was designed.

Alexander the Great, Conqueror of the Persian Empire

The subject was selected at the artist’s own discretion. In a handwritten note, Delacroix described the chosen scene as follows: Following the Battle of Arbela, Macedonian soldiers found a priceless golden chest among the corpses of the Persians. Alexander ordained that it be used to hold the poems of Homer . The events thus took place in the 4th century BC, during the final battle between the Persian armies of Darius III and Alexander the Great’s victorious troops. Delacroix was no doubt inspired by the writings of historians from Ancient Rome (exactly which one is not known, as Quintus Curtius Rufus placed this episode in Damascus, while Plutarch believed it to have occurred in Gaza), who recounted Alexander’s admiration for Homer’s works, and particularly The Iliad, of which the conqueror knew entire passages by heart.

The Worship of Homeric Poetry

The choice of this subject reflects the purpose of the space in which the décor is set: study, reading and contemplation. The serene landscape and peaceful sky contribute to this luminous tribute to poetry and art—treasures of even greater value than military trophies. To make the scene expressive, Delacroix divided his composition into three parts: on the right, Alexander is seated amongst trophies of his recent conquest, crowned by the figure of Victory. His eyes are averted from the vanquished and captive figures. To the left, the victorious Macedonians carry off the manuscript in the precious chest. An overturned chariot with its charioteer lying on the ground while his horse rears in terror suggests the battle that has just ended. A horse can be seen collapsing in the background. In the center, the trophy of arms seems poised on the window ledge atop which it sits. The pyramid-shaped layout of the whole is in harmony with the form of the semi-dome, illustrating a great mastery of mass distribution.