The Musée National Eugène-Delacroix joined the “Maisons des Illustres” network on January 1, 2016.
The Maisons des Illustres, literally houses of the illustrious, are houses with major historical and cultural significance for France. They show the diversity of French heritage, found in both the traces of its monuments and the collective imagination.

Created by the French Ministry of Culture and Communication in 2011, the “Maisons des Illustres” label is awarded to houses with the aim of preserving and passing on the memory of the famous men and women who lived and worked there. These illustrious inhabitants were renowned for their innovative ideas in the arts, literature, science, music, theater, and film.

Consulte the Guide to Landmark House in Greater Paris Region.

The Musée Delacroix is a member of the European Artist’s Studio Museum Network. The website provides information on the fascinating places where famous artists lived and worked, offering a window into their spaces and collections.

Each year, the studio museums of Paris organize a city-wide tour of these places steeped in history and artistic creation. Free admission with a ticket from one of the participating museums: 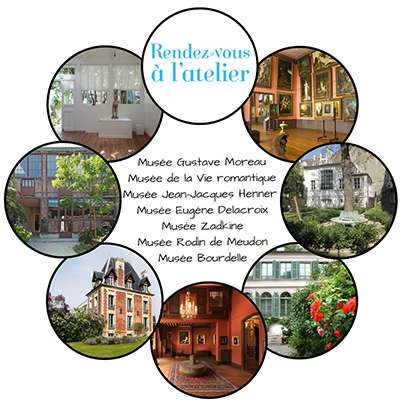